It was only a matter of time before I started this thread, since the Series B and C threads were fairly popular.

Series A SPECIMEN notes are an entirely different ballgame, and typically quite hard to get the Waterlow era Specimens.

There are a lot more of the later Series A specimens about, some with a TDLR red seal stamp, and the rarer ones with just a bogus date, and an all zero serial number, aiding identification by use of a letter in the serial. Some Waterlow era notes had a number (which is presumably written in pencil) on the top right hand side of some of the notes. (All of my 1950's Specimens have these numbers). The purpose of these numbers is beyond me, but I assume as a tracking reference (?).

Typically the Series A specimens were hole-punch cancelled, the purpose of which (vs later Series B and C specimens) may be clarified by some other forum member.

The task of collecting all these notes of Series A is probably, by and large, unrealistic.
There are about 7 notes of each denomination listed, and I'd be fairly sure a lot of the pre TDLR notes are unobtainium.
I haven't seen many of these notes in Gem condition.
A realistic approach is likely to get a full set of specimens in any order that you can.
Has anyone actually seen many of these specimens in private hands?

I will update this post as I obtain the notes, but It's doubtful I'll get them all in my lifetime!

Here is a nice £10 Specimen that I recently obtained - a post-war Type 6. Truly the best condition possible. 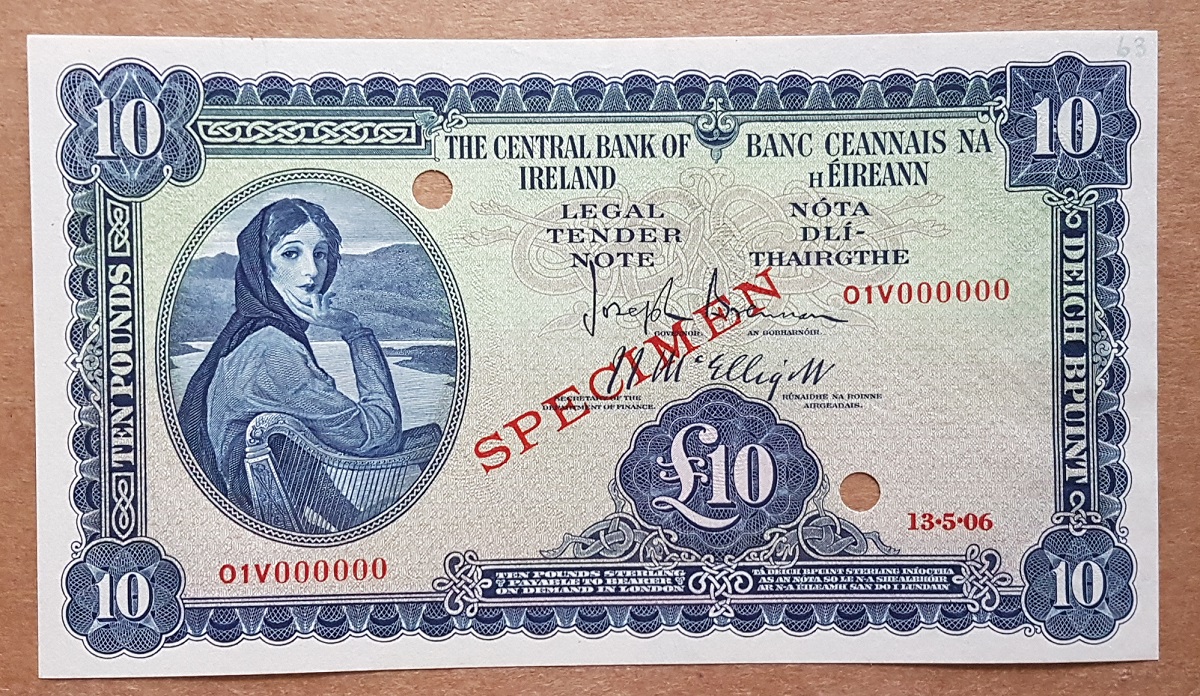 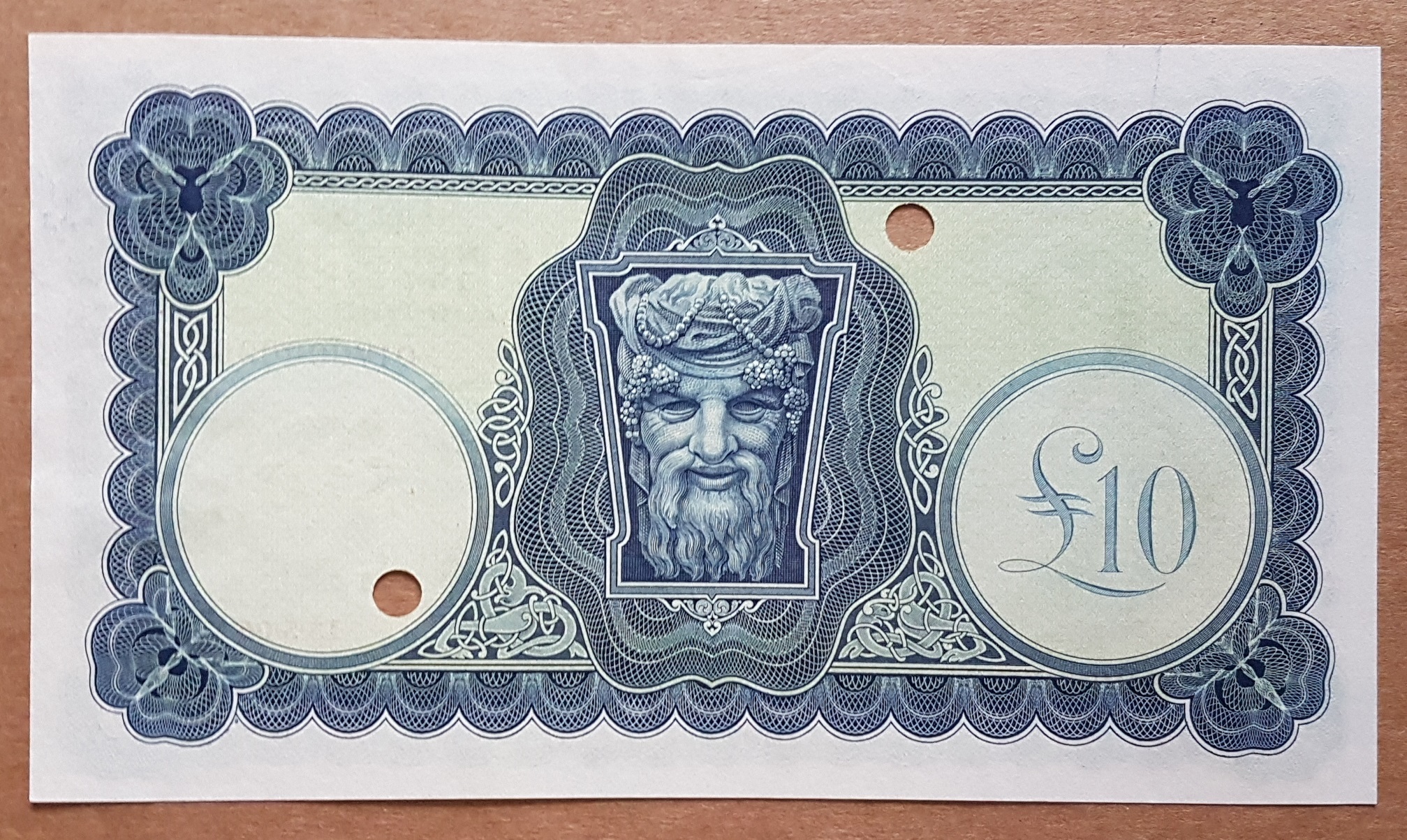 Here is another nice note; A 10 Shilling Specimen, not your typical De La Rue Specimen, at that. The date has 6.6.68 (the last date of printing the 10 shilling note). It has no TDLR red seal, either, which I think is interesting. Also, the perforation is the first I've seen in this style. 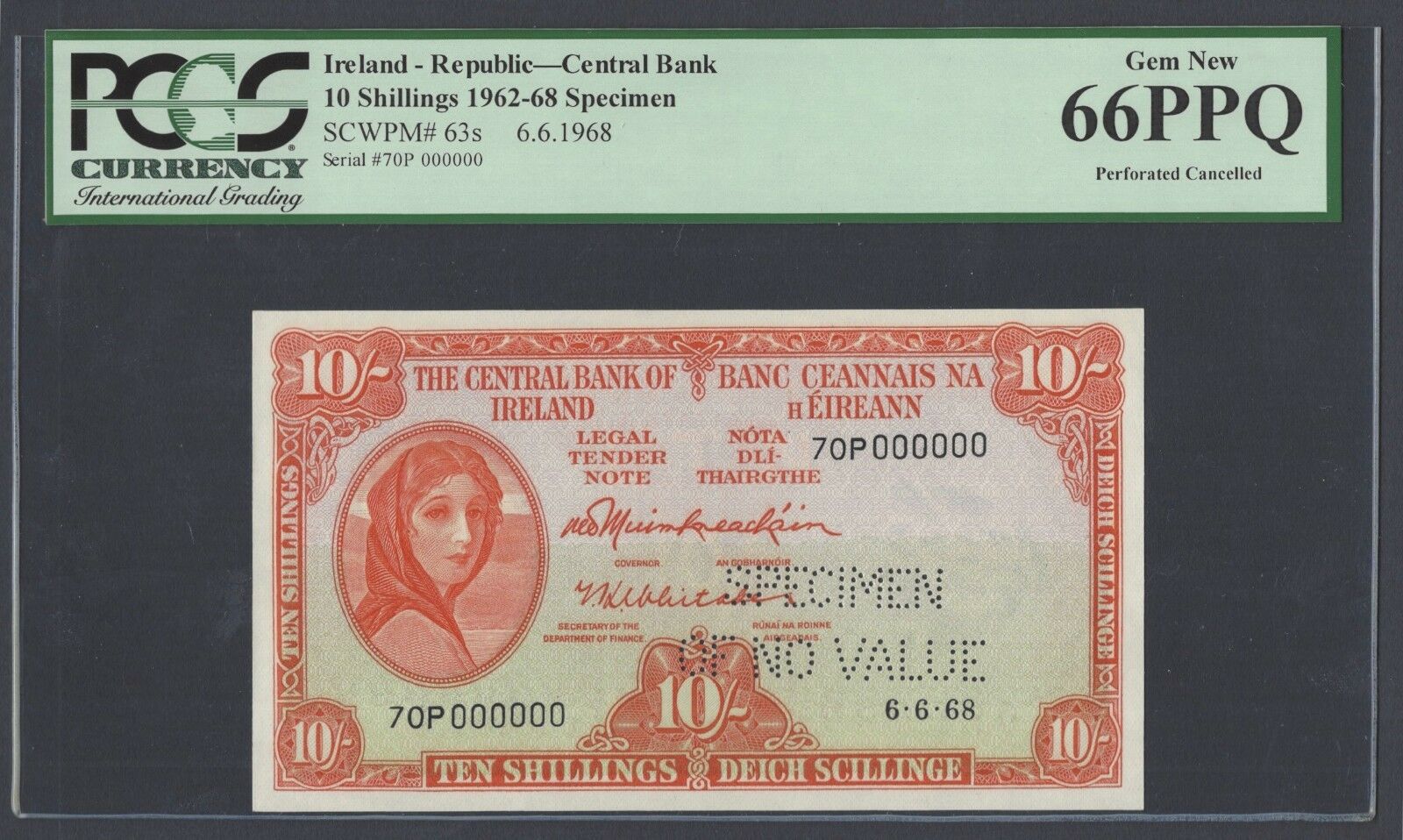 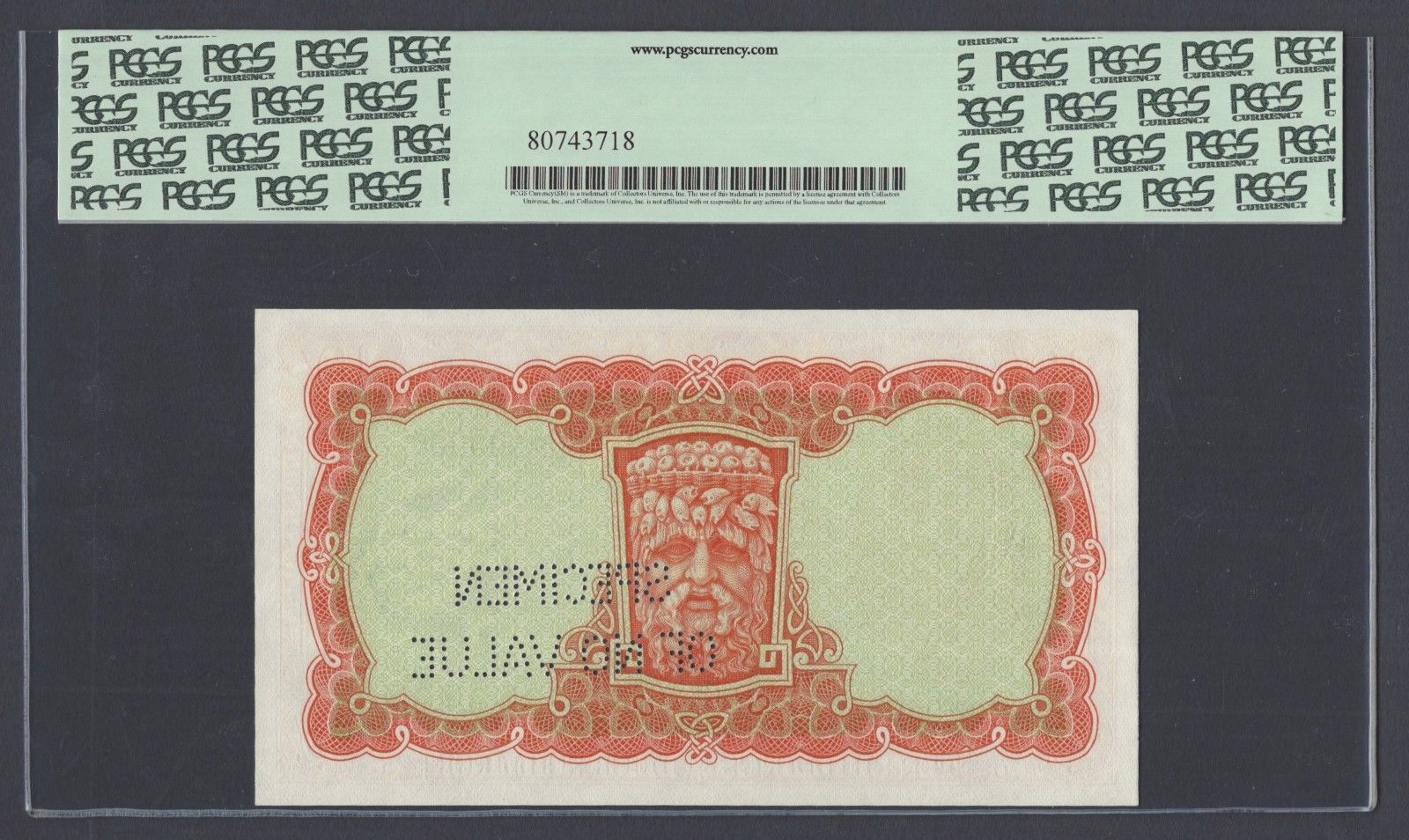 The TDLR Specimens of A Series notes are quite common. There were several large lots of them in Spink around 20 years ago. Central Bank specimens are much rarer, with very few being officially in private hands. The TDLR notes then to be quite cheap when they appear in auction.

In terms of condition, Specimens tend to not turn up in UNC, as their purpose is to be handled and looked at. Those graded as UNC generally aren’t. I find that light handling on an otherwise original AU note is generally the best grade that an A Series specimen will be found in.

The post-1928 earlier notes tend to tun up as singles, so build your collection in bits!

As far as I know, the numbers written by hand on Currency Commission and Central Bank Specimens were added when the notes were sent out on loan to banks and other entities. They are a tracking reference.

The dates on early specimen notes are not ‘bogus’, but carefully chosen. The earlier dates fall on a Sunday, whilst dates on issued notes were always that of a working day. 13.5.1906 was a Sunday.

Punch-cancellation was a normal security method of cancelling a banknote in the era of these specimens. The Redmond signature specimens are cancelled with three large holes, very annoying for a collector!

Specimen notes of other types between these were produced, but were likely not circulated widely. Occasional examples of pre-1960 specimens outside of the known Brennan-McElligott types do turn up.

CBI Sandyford print notes, with the exception of the £1 note have not been seen as specimens. This is probably because by the 1970s Specimen Books were being produced, containing good quality printed images of the new notes. These appear to have replaced actual specimens as reference copies in many cases.
Top

Thanks Mac, I really appreciate the in depth response.
It is no small undertaking, but at least now I have a clear vision as to what is obtainable.

Do you happen to know more about the 10 shilling I posted?
It definitely is a printers specimen, but with no TDLR seal, which I thought to be interesting.
I have a lot of questions, you may have realised!
Top

A late TDLR specimen. Some of these perforated specimens turned up in auction a few years ago, with examples of all denominations if I remember correctly.

I will be adding a Specimens section to the main web site at some stage, with pictures of all the notes I have seen.
Top


This excites me greatly. I'm really looking forward to seeing it.
Top

Here is a pic of a 1957 specimen I saw on a web site recently.
It is unusual because it does not have the word SPECIMEN printed on it.

The SECIMEN overprint has been removed in an image editing program.
If you look carefully at the image, around the signatures, and the text “NÓTA DLÍ THAIRGTHE” evidence of doctoring can be seen.

This is the first McElligott, Whitaker £1 note Specimen I have seen.
Top

The 1928 specimen notes are the most common of the early specimen types, pre-1961 notes with Sterling format.
Top

Has anyone ever seen a FIVE of the 'Sandyford' type?
Top

Ploughman, I see reference to a Central Bank £5 specimen in Irish Banknotes First Edition. Mac may have a scan.
Top

DOC wrote: ↑
24 Nov 2020 19:48
I wonder if there is a De La Rue specimen for the Whitaker Murray signature combination without metallic security thread?

There is! The £1, £5, and £10 specimens exist with and without metallic threads.

I don't have one unfortunately. I do have a scan of the 1975 £50 sans serif specimen, which is illustrated in Irish Banknotes First Edition.
Top
Post Reply
14 posts • Page 1 of 1