1919. The short-lived General Strike in Limerick which produced an interesting banknote issue.
Locked
6 posts • Page 1 of 1

April 1919
The Limerick Soviet Note happened as a result of a mixture of general post-World War 1 social upheaval and the gathering momentum towards the Irish War of Independence.

Industrial Unrest
The aftermath of the 1916 Rising had removed most of the militant Nationalist leaders from circulation. This allowed the rise of the militant labour movement, sometimes in an unsure alliance with the new Sinn Féin movement.
With a shortage of troops for the war in Europe, the British Government decided to extend conscription to Ireland in April, 1918. Politicians, the Church and the labour movement, in the form of the ITGWU, all came together in their opposition to conscription. This resulted in a general strike in protest on 23 April 1918 which lead to the idea of conscription in Ireland being abandoned, a significant victory over the British Government.
At the end of the first World War Europe was in turmoil. Germany and the Austro-Hungarian Empire had collapsed, taking the old order with them, against the background of the rise of Bolshevism. There was widespread social and economic revolution throughout the continent. In the United Kingdom of Great Britain and Ireland there was similar unrest with regular strikes in major industrial cities in Britain. August 1918 to April 1919 saw general strikes in several locations in Ireland in a peaceful effort to win a better deal for workers. This was against a general background of insurrection in Ireland as the War of Independence commenced.

The lead up to the strike
It was against this background that an incident occurred on 6 April 1919 in which Robert Byrne, a trade unionist and IRA man, court martialed and jailed in February on a gun possession charge, was rescued by the IRA from a prison hospital. It was a botched operation, during which a police constable, Martin O’Brien, was killed. Byrne also died later from his wounds. He had been a leader of the struggle for political status for IRA prisoners whilst in prison. Thousands of marchers attended his funeral on April 10.

Martial Law
On April 9, citing the death of the police constable as a reason, much of Limerick city and county was declared a Special Military Area under the provisions of the Defence of the Realm Act. These provisions were intended to flush out IRA men concealed in the midst of local populations. It enabled the military to issue exit and entry permits for the area and made the population subject to police inspections at any time. Tanks were used to secure the streets at entry points to the SMA. The restrictions were quite repressive and were resented by the population at large.

The Strike
The Limerick Trades and Labour Council was an umbrella organisation of 35 trade unions. It’s president was John Cronin of the Amalgamated Society of Carpenters. At a meeting on Sunday April 13 1919, the LTLC called a general strike in Limerick, to protest at martial law and the fact that many workers had to have permits and pass through the military check points in order to go to and from work each day. The strike started on Monday 14 April 1919. 14,000 workers had joined the strike by that Monday evening.
The strike committee took over the administration of Limerick, a city with a population of 38,000. The distribution of food throughout the city was regulated and prices were strictly controlled to avoid shortages or profiteering. Certain shops were instructed to be open between 2 and 5 pm each day to supply foodstuffs to the population. The LTLC also published its own newspaper and issued its own currency. It quickly became known as the Limerick Soviet, although the situation bore little in common with happenings in Russia.

The resolution of the strike
Negotiations progressed throughout the duration of the strike. The British Army softened the regulations governing the issue of permits, by suggesting that employers be allowed to issue them, a move rejected in the first instance by the Soviet’s leaders. In the end, the strike was not supported by other unions outside of the Limerick area, most notably the big unions based in Britain. The hope of its organisers that it might become a country-wide general strike, or that Limerick might be evacuated, were not realised, leaving the strikers few options but to accept a settlement. The LTLC decided to end the strike and on Friday 25 April most strikers resumed work, only those subject to permit inspections remaining out. The strike ended on Monday 28 April with all the strikers returning to work.
In the event, any IRA men who were within the SMA kept a low profile throughout the proceedings and it proved ineffective in its efforts to flush them out. On 5 May Military restrictions were officially ended.
The British Army commander in charge of the military area was a General Griffin, who handled the whole affair with cautious but firm diplomacy and sought to avoid any nasty incidents. On the whole, the affair was a generally peaceful one. The only significant confrontation was the eventual successful breach of the area by several hundred people on Easter Monday, 21 April 1919, following a protest the day before.
Although an open challenge to the British Government, the strike was not intended to be political, but was about the rights of workers to come and go to their place of work without repression.
Top

The Limerick Soviet banknote issue
Some unions, most notably the National Union of Railwaymen, decided not to issue strike pay to their striking members inside the Soviet. Although food was sent in sizable quantities from the outside, little money was forthcoming. The resulting shortage of money in circulation lead the Soviet to take the decision to issue its own currency in the form of banknotes.
Security for the note issue was in the first instance to be the food stocks sent free from outside and the financial support of the workers of Limerick. Later the notes were backed by the trades council and the Trade union Congress, and by the approved shops which agreed to accept them. The banknote issue proved to be a stable one.
A sub-committee of the LTLC propaganda committee was in charge of printing and issuing the currency. The size of the population would suggest the need for a substantial banknote issue. Available data suggests that the entire issue was redeemed by the LTLC. A small surplus of unredeemed banknotes remained in a fund that had been subscribed to by sympathisers throughout Ireland. Some of these notes were probably kept as souvenirs.

Signature varieties
There are two suggestions as to why more than one signature variety exists. The first suggestion is that a proxy signature system was in use during the issue period of the notes whereby, others signed the notes in the name of the signatories with their agreement. The second suggestion is that unissued notes were signed after the end of the strike, by persons other than the signatories, for souvenir hunters. If the latter is the case, then the notes with the non standard signatures may be regarded as at best an extraordinary issue, or at worst being non valid due to a lack of an authorised signature.
Currently there are three versions of the signature pair known. Two examples of one of the versions, B2, have been observed on un-numbered notes, which might suggest a post-strike souvenir notes. Version B1 has been observed on numbered notes, suggesting an official proxy signature during the strike. Version A is in the hand of the signatories themselves and therefore definitely the official issue.
Top

Here's an interesting historical item, a 10 Shilling note kept by C. M. Hathaway, Jr, US Consul in Ireland during the Limerick Soviet in 1919, complete with the American Consular Service envelope it was stored in. 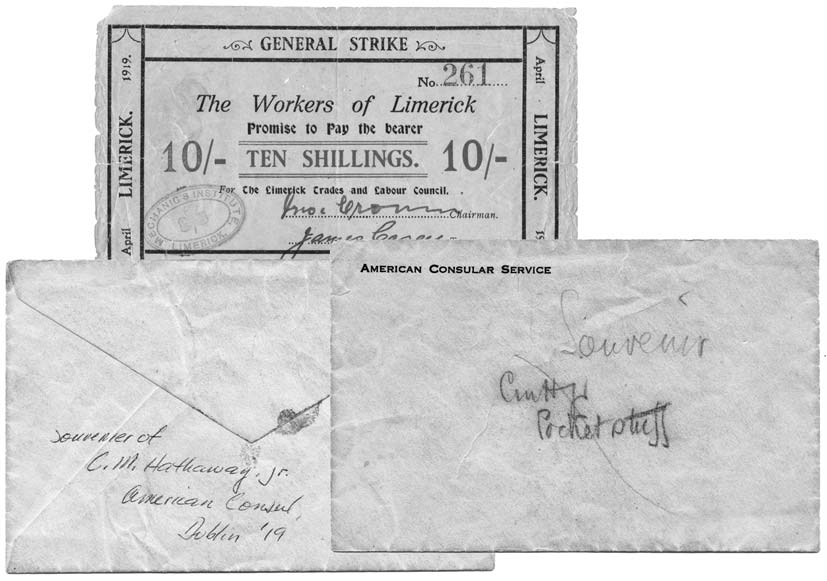