Original [print] version (2016), published in Coin News as: Irish banknotes in 1916. The evolution of the design of the banknotes of Ireland up to 1916, April 2016, p82.
This [electronic] version (2017) www.irishpapermoney.com/forum/viewforum.php?f=22 Numismatic Articles and Papers / Occasional Papers on Irish Paper Money

In contrast to the political turmoil which had been simmering in Ireland in the lead up to the 1916 rising, the island had evolved a solid and stable domestic fiduciary currency provided by six large joint stock note issuing banks with hundreds of branches between them covering the whole island. For decades this banking system and its attractive banknotes, each with all of a bank’s branches listed on every note had enjoyed the full confidence of the general public.


Ireland before Partition—political background
The island of Ireland had been an integral part of the United Kingdom of Great Britain and Ireland since the Act of Union, 1801. Irish representatives attended parliament in Westminster, accounting for approximately one sixth of the seats. By around 1890 there were two main groupings of Irish MPs, Nationalists (seeking Home Rule), and Protestant Unionists (against Home Rule). The latter were concentrated in the northeast of the island and in a small part of Dublin. Irish politics had become local, geographically-speaking, with a former Conservative representation (ca1880) being entirely replaced by Unionists.

Ireland had been a relatively stable recalcitrant province of the British empire for a few decades by the outbreak of the Great War in 1914. Things had begun to change in Ireland shortly before this, with Home Rule on the agenda for the island. The passing of the Government of Ireland Act, 1914 provided for Home Rule in Ireland, and as a result a possible civil war was looming between the Unionist north east (against) and the Nationalist south and west (for).

Both camps had raised large forces of volunteers to fight for their causes and were proceeding to import arms. Home Rule was postponed by the outbreak of war, and the two rival camps had sent their men off to fight in France in the British army, around 50,000 men in all, more or less half from each side. Approximately another 150,000 Irish men also fought in British forces, including career soldiers.

Those left at home were soon to have other matters to attend to. The vacuum left by the departure of all the volunteers to France was filled by a “terrible beauty”, as W. B. Yeats referred to the 1916 rising, which came as a shock to almost everyone. Although the rebels were defeated, the British government mishandled the aftermath which allowed for the politics of independence to take over from that of Home Rule.

This continued until the 1918 General Election when the new Sinn Féin Party (formed in 1905) stood on an independence ticket and all but wiped out the Home Rule Nationalist representation. Sinn Féin then declared independence and its representatives formed their own parliament in Dublin, called Dáil Éireann, which first met on 21 January 1919. This lead to the Irish war of independence, which started on the same day. The war resulted in the partition of the Island in 1922 into two entities: the Irish Free State with Dominion status comprising 26 of the 32 counties of Ireland, which was to become independent; and Northern Ireland made up of the 6 remaining counties in the north east, which remained part of the UK. This laid the ground for great changes to the currency circulating in Ireland, which was already undergoing modernisation since around 1918.


Currency background
In contrast to the political situation, in the decades before 1916 the currency circulating on the island of Ireland had settled into a long and reliable stability, with English token coinage, and gold circulating alongside banknote issues provided by the six Joint Stock banks which had the right to issue notes. The largest and oldest of these, Bank of Ireland functioned along the lines of a central bank, similar to the Bank of Scotland at the time.

Although none of the banknotes were Legal Tender the note issue was stable and had the full confidence of the public. Bank of England notes were also not legal tender in Ireland, though they circulated in small quantities. Thus, there was actually no legal tender paper money in Ireland, which remains the case today in Northern Ireland and Scotland, both of which still have strong note issues provided by some of their joint stock banks.

By 1916, the design of the notes in circulation of each of the banks had completed an evolution of several distinct stages, lead by innovations by the Bank of Ireland which resulted from changes in the legislation governing paper money on the island of Ireland.


Paired-branch and protomultibranch issues
Banknotes of the banks were redeemable in gold at the branch of issue. This requirement that the notes be payable at their branch of issue gave rise to the single branch issue notes, commencing from the foundation of the joint stock banks (1824–36), whereby the name of the branch of issue was printed on the note. Founded in 1783, the Bank of Ireland had confined itself to Dublin until competition in the form of other joint stock banks appeared. As it began to open branches outside of Dublin, the Bank of Ireland started printing branch names in addition to Dublin on its notes from around 1830 onwards.

The earliest Bank of Ireland note seen with more than one branch besides Dublin is a Thirty Shilling note, 4 Nov 1831. It has branches Newry and Armagh on either side of the head office, Dublin. Thus, so-called paired-branch notes appeared. This evolved into the protomultibranch General Issue notes, those with extra branches added to what is essentially a single branch banknote design without the design being revised. The earliest recorded Bank of Ireland protomultibranch banknote is a £1 note dated 5 Oct 1855, which has six branches in alphabetical order in addition to Dublin. Bank of Ireland produced at least two different regional variations of the design with branches north of Dublin on one and those south of Dublin on the other.

The National Bank produced a proof (ca 1856-1869) of a protomultibranch design with 16 branches added in a scroll area on the left side of the note. The branches listed on the note are only a partial listing of the bank’s branches, suggesting that the bank may have been considering a regional design similar to that of the Bank of Ireland. No issued notes have been seen of this. The National Bank introduced its multibranch General Issue in 1870.

Provincial Bank of Ireland also produced a short-lived protomultibranch design by adding a block of branches to the existing single branch design. Paper Money of Ireland (2009) notes that these have been seen dated from 1848 to 1869, though the branches were likely added around 1870 (the number of branches is consistent with that era) on older stock notes already printed to use up the extant note issue prior to the introduction of a multibranch General issue in 1870. 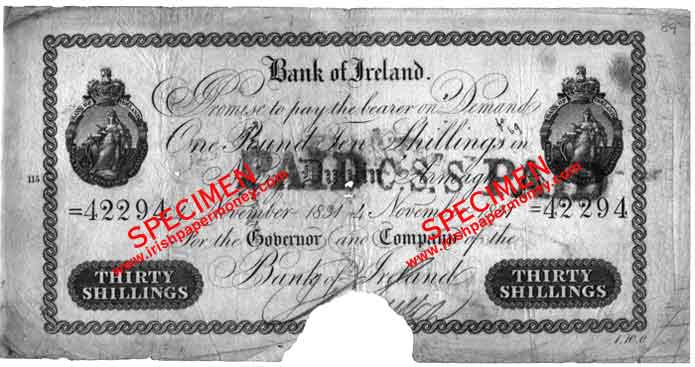 The earliest known Irish banknote with more than one branch on it in addition to the head office. Bank of Ireland 30 Shillings dated 4 Nov 1831. 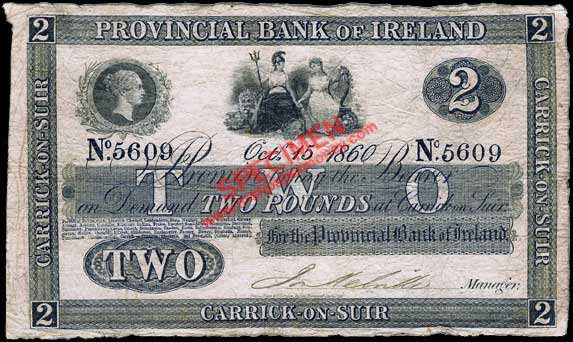 
Multibranch General issue
The designs of the banks’ note issues evolved to accommodate the listing of the branches. Multibranch General issue notes are those of a new design with all the branches of the bank on each banknote. The earliest true multibranch note seen is an Ulster Bank £1 note dated 1 July 1852, with all 18 branches of the bank listed in the two side panels. Although the core design used by the Bank of Ireland for its multibranch notes is first recorded as a 30 shilling note dated 3 Sept 1842, the bank went on to use the design for its protomultibranch issue before it used it for its multibranch issue. The presence of all the branches of a bank listed on every note adds a unique dimension to Irish banknotes of this era, not replicated on any other world banknote issues.

The banks adopted differing means for listing their branches on the notes. Bank of Ireland placed the branches in a block in the centre of each note in several lines, in much smaller type than on the protomultibranch issue; the National Bank also adopted this approach. The Ulster Bank and Belfast Banking Company listed their branches in panels on either side of each note. The Provincial Bank listed its branches in the centre of its £1, £50, and £100 notes, and in side panels on its other denominations. The Northern Bank listed its branches around the four border panels of its £1 notes, and in the top and bottom panels of its other denominations; in 1918 the bank redesigned its notes, listing the branches in several lines in the centre of each note, a more efficient arrangement, likely to make it easier to accommodate the bank’s growing number of branches.

The two banks with monochromatic black ink notes introduced colour to their designs around the turn of the century: National in 1901 (by means of a high quality green gravure under print); Provincial in 1903 (colour changed to blue with light orange under print). Both banks’ notes were printed in London by Perkins Bacon & Co. Ltd. As the banks grew in size and their number of branches increased, extra branches were added as overprints adjacent to existing branch listings. The branch block was re-engraved periodically to allow for the incorporation of the extra branches into the main alphabetical listings.


Change: 1916 to 1930
The paper currency circulating within the island of Ireland was comfortable in its stability by 1916, but it was about to change radically as a result of several factors. The political turmoil sparked by the 1916 Rising; the general modernisation of paper currency resulting from inflation and new printing techniques, leading to smaller banknote sizes, printed on both sides for better security; and changes in legislation governing paper money in Ireland, removing the requirement to list branches of payment would all have their effect. From 1918 through to 1922 the paper currency of Ireland underwent sweeping changes so that by 1923 most of the banknote issues had been transformed completely.

Most banks’ notes were being printed on both sides by the time of partition of the island on 3 May 1921, and all of them had been redesigned, omitting the branch listings to leave just the head office of payment on the note. By 1930 all of these note issues had been withdrawn and replaced by new issues which reflected the political changes in Ireland. The Legal Tender ‘Lady Lavery’ Government issue and the Consolidated Banknote issue had replaced all of the other note issues in the Irish Free State; and a separate Northern Ireland issue of the joint stock banks had been created to replace the existing note issues there (See Coin News, issues August through December, 2015). The stability of the banking system through this short era of rapid change was in stark contrast to that of the political system.

Examples of a banknote from each of the six Irish joint stock banks which had the right of note issue, all with issue dates in 1916. 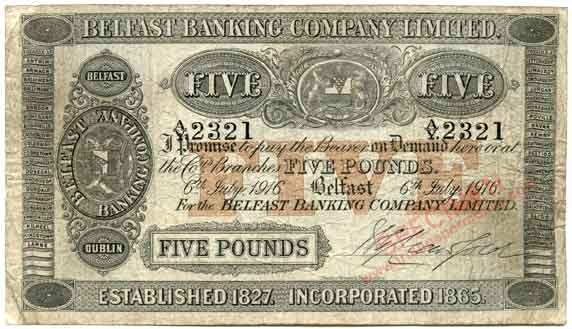 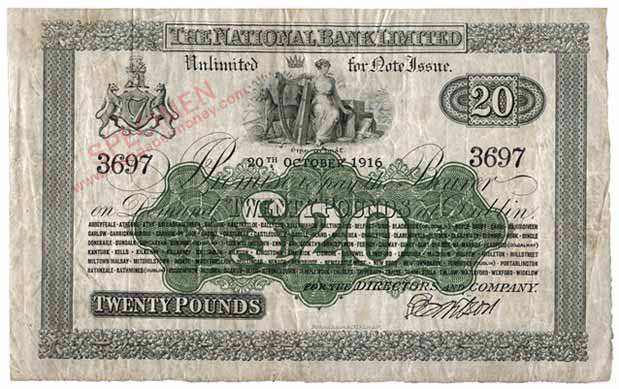 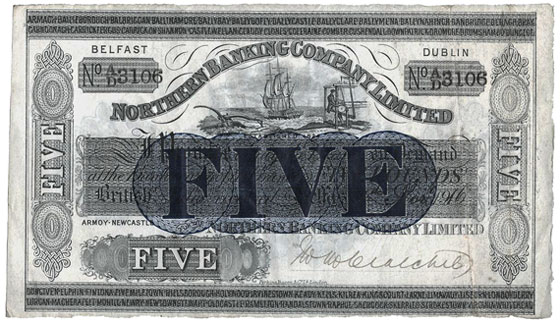 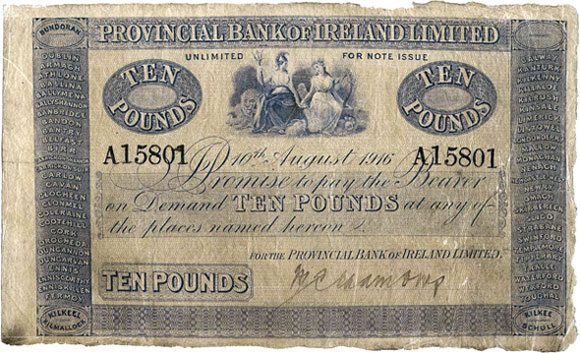 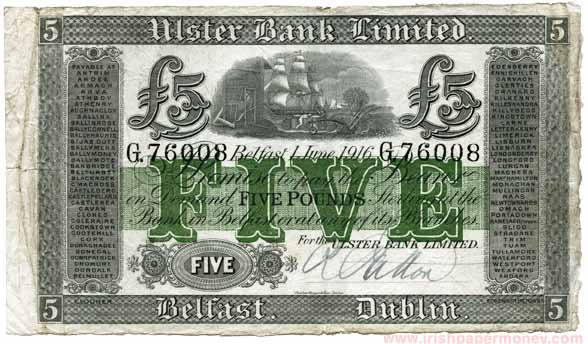 References
Annual Reports of The Currency Commission and The Central Bank of Ireland (1927–2001). Irish Government Publications.

Moynihan, M. Currency and Central Banking in Ireland 1922–60, Gill & MacMillan in association with the Central Bank of Ireland., 1975.
Top

Re: Irish banknotes in 1916. The evolution of the design of the banknotes of Ireland up to 1916

Images and more information on the old note issues of the six Joint Stock Banks are presented on the main website in the section on pre-partition banknotes.

The Introduction to Irish Papermoney Issues on the main website presents an Irish Papermoney Historical Timeline of Irish banknote designs and issues, which traces the changes in Irish papermoney through time from 1783 to 2001 and beyond.
Top
Post Reply
2 posts • Page 1 of 1