The Extraordinary Issue One Pound notes with prefixes 01X and 02X were issued in 1974, and caused a minor panic at the time (as reported then in Irish Numismatics, and other media) as the notes did not contain a metallic security thread (introduced in 1971), and people thought these notes were forgeries.

The notes were a response to a shortage of £1 notes and had been printed in 1963 with non-standard prefixes, 01X and 02X. 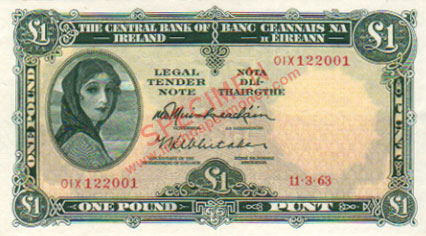 These notes also exist with dark ink date and serial numbers, the mulberry variety.
Not a very good pic on this one, but it does illustrate the difference. 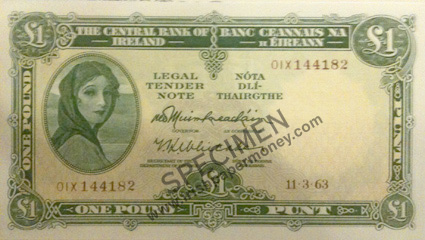 I've done a quick survey on these to track serial numbers to test if both prefixes were completed.

Both prefixes go well into the 900000 region, so it is pretty certain that the full two million notes were printed for the date, and that they were all issued.

These were issued due to a Banking Strike taking place at that time. That's the background for this anomaly.
Top

Yes, but the anomaly is their existence in the first place.
Were they printed to be used as replacements, perhaps?
Top

From these data, it is reasonable to conclude that all two million 01X and 02X notes were issued.
Top 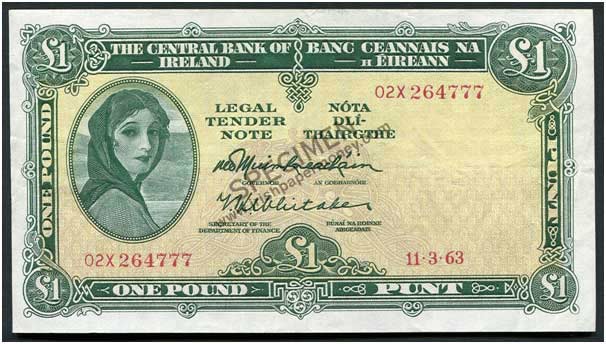 The survey of these notes is continuing. 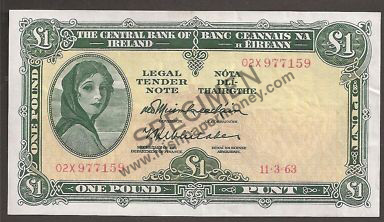 EDIT.
There are 119 notes recorded in the survey thus far.
Top

This completes the observation of all the number ranges leading 0 to 9 for both prefixes.

EDIT.
There are now 141 notes recorded in the survey by image.
Top

Much better, thanks!
Top

153 notes recorded as of today.
Top

A few of these have turned up lately.
Total now stands at 164.
Top

The number of recorded notes now stands at 175.
Top

Here are my X reg notes for the list.

Nice!! Thanks for those, I will check them in to the database.

That brings the total count of recorded notes to 183.
Top

Mac, you probably have this one in the Database:

@wifwaf41
Have those two already in the database. I hadn't noticed that one of them was in the book!
Top

I’m still trying to come up with a reason for these notes having been produced. I’ve noticed mention in the CBI archive of research into the revenue commissioners producing currency as I think the did with stamps. Could it be a trial run from them. Also just looking at a documentary about the winter of 1963 where both Britain and Ireland were practically closed down from end of December 62 to March 63. Could these be some was connected to this event? A small batch delivered in less a less secure way than normal due to the disruption and numbered differently so they could be identified like warcodes.
Top
Post Reply
25 posts