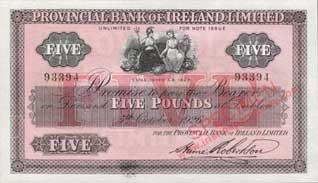 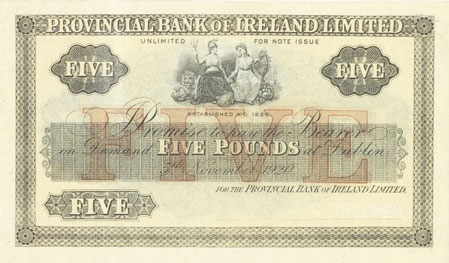 Punch cancelled Provincial Bank of Ireland £1 remainders are known with the date 1st September 1926 and 1st December 1926. Here is an example of the former date with the punch cancelled holes repaired. The note was sold recently at auction with a full description of this fact. The quality of the repair job is high and it would be difficult to spot this without the note in hand. A standard punch cancelled note is included for comparison.

Which auction was this.

This could be a significant issue, if remaindered notes are going to be repaired in this fashion, likely by cutting a piece out of one note to use it to repair another, a perfect repair with authentic pieces.

Essentially, this is forgery, turning a cancelled note into a facsimile of an uncancelled note. Genuine issued Provincial Bank of Ireland notes of this era are still redeemable at their face value.

Some collector could get stung if one of these forgeries is sold as a genuine note.
Top

Here is the link to that auction.

Spink withdrew that note from the auction once they were told what had been done to it. Genuine notes would not have been numbered above 200000.
Top

Very useful to publicise this.
Top

It does get a mention on page 436 of PMI and if you look at the listings it is clear no issued notes have serial numbers beyond 200000. The same pattern continued after 1929 and right up to 1972 when the print run of the final prefix of the £5 notes was higher.
Top

There seem to be a lot of these originating from this source, all numbered above 200,000.

Is it genuine, or suspicious?

Have a look at the utterly fascinating Neutral and Negative feedback this seller has over the last 12 months, 7 of each, along with 23,957 positives let it be clearly said!

One of the Neutrals is about this note:

Left: Provincial Bank notes are watermarked, the validity of this note is dubious. I have to research further before jumping to unfair conclusions.
Replied: Yet you left neutral feedback, for a banknote that is UNDOUBTEDLY 100% genuine, printed with intaglio and embossed on both sides, on the paper that was in use in 1926 and can't be found now. Look at these notes graded and authenticated by PMG, there is no watermark!!!

I love looking at the non-positive feedback of new-to-me sellers to see what personal lessons can be learned, or just for plain entertainment purposes.
Top

This seller has remarkably good feedback. Not easy to keep all of the people happy all of the time !

Interesting point about the missing watermark. These notes appear to be original printings of Perkins Bacon but part of the run was printed on unmarked paper. This could be an error or they could have been part of a test print. Here is another example with a higher serial number, again without watermark.

Other spectacular print errors have been observed such as the black & white note attached. PMI 2 provides some nice background information on these ‘remainders’.

All these 1926 Provincial Bank notes have survived because they were returned by the printer to the bank in wrapped bundles of 500 each. They sat in a bank vault until "rescued" a few years ago. One note in each bundle had the handwritten word "Spoilage" on it as did each wrapper (I called them remainders in PMI< with hindsight not an entirely accurate description). I am preparing to write the whole saga up for the IBNS Journal.

But they are definitely all "genuine" in that the notes and the paper they were printed on were genuinely intended for issuance. However the survival of so many of them and the range of different types of error make an interesting story of manufacturing efficiency at one of the major banknote printers of the day.

From what I understand there may have been as many as 12 bundles of 500 notes each, all dated 1 Sep or 1 Dec 1926. The probable total print run of the £1 notes of those two dates was maybe 200,000 split between prefix H and prefix J. Issued £5 notes dated 5 Oct 1926 would probably have been rather less than that but we have no issued survivors to guide us. All the errors carry 1926 dates but errors they are, possibly as many as 6,000 of them, and we would never have known about them if there hadn't been an agreement (I surmise) between the bank and the printer that all errors had to be sent to the bank rather than destroyed by the printer - which I am sure is what they would have preferred to do with them. 6,000 out of an order for c.250,000 notes is an error rate of c.2.4%, very high I would have thought.

Any further observations by others would be welcome. I haven't put electronic pen to paper yet!
Top

Are those eBay notes worth the sort of money they are making in light of the known "remainders" numbers?
Top

The point about the absence of the watermark is interesting.
This could be an easy means of flagging instances of these notes which have been 'enhanced' by having the punch cancellations repaired using bits taken from other notes, especially if any of the 'enhanced' notes end up being certified by one of the grading companies.
Top

LimerickNomad wrote: ↑01 Dec 2022 11:17 Are those eBay notes worth the sort of money they are making in light of the known "remainders" numbers?

Nope, imho. But ebay is one of the great unregulated open marketplaces of our age.
Top

I have examples of these punch cancelled 'remianders' including all the partially printed instances, and an issued note in unused gVF grade (UNC with a few creases) to compare them against. I will haul them all out of the bank and have a look for watermarks, and post my findings.
Top
Post Reply
19 posts • Page 1 of 1